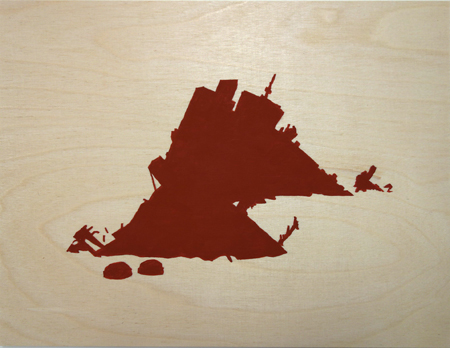 Throughout art history, the sea has been a source of fascination and inspiration. The simultaneity of its tranquil atmosphere and violent unpredictability seduced painters such as Joseph M. W. Turner and Théodore Géricault whose famous painting ”The Raft of the Medusa” depicted the survivors of a tragic shipwreck. The relationship between man and nature characterizes the basis for the exhibition ”The Powers” by Birgitta Silfverhielm who utilizes the gallery space of ID:I to present a compilation of works which draw upon events, places and her personal experiences with the sea.

Silfverhielm creates a platform for exploration where past and present are examined through the notion of shipwrecks. In the main room of the gallery, Silfverhielm draws three large murals of recent shipping accidents that occurred in Spain, New Zealand and Antarctica. The outcome of these events has had a direct impact on human life, the economy and nature and at the same time they imbue a psychological aspect about an uncontrollable power greater than human ability. As Silfverhielm describes, ”the sinking ships create an image of our civilization breaking down from the forces of nature.”

In parallel to the murals, Silfverhielm’s interest in nature and the sea emerge through displays comprised of drawings, photographs and sculptures that have been retranslated from their original state into another meaning and form. She is inspired by the contours of mountains or the lines on a map and feels she is ”in a world of surfaces, with an opportunity to go beyond them.”