Welcome to a joint show by Joel Hurlburt and Timo Menke

The real world begins, in the modern age… with the invention of an Archimedean point outside the world… by which the natural world is definitively alienated… We may say, then, that the real world begins, paradoxically, to disappear at the very same time as it begins to exist.

With darkness so came thickness, or was it the other way round? Inside, outside, within, beyond, infolded and looped, navigation is becoming more important than ever, at the same time it is harder than ever to find one’s position, let alone one’s direction. The historical transformation of cinema into current “social media” flows is connected to a post-cinematic affect with an endless drive for the end, for images of the end, or perhaps for a last image. Can we imagine ourselves beyond the end? Could we be digitally reanimated from the other side of that end? Can we think beyond that dystopian limit? After Earth has turned flat again, with new hard borders to fall off from, screens are instead getting thicker and deeper. Slowed-down moved images rather than moving images, captured in combined 3D and 2D, are set to generate a new thickness – a thick film that is beginning with the end, turning itself inside out, suggesting positions of powerlessness, indifference and sameness, entering a state of being awake and asleep, living and dead, standing and hanging simultaneously. The thick film subjects are in flux somewhere around a dark island. Beyond the scope of vision, which is made up of a theoretically gelatinous island, lays all that is not sight. The standard camera lens, and the resulting flat image offer an acceptable view of that which appears before it; a conical representation of the island; fixed in position, the lens now has a coordinate in a global, even interstellar, matrix. Volumetric Video, the term used for the techniques applied in the production of this exhibition, offers the chance for a second lens to enter and navigate the scene. What is reviled is a vision strafed with blind spots and occlusions, one in which the viewer is lift to navigate a non-space of thick inky black. Outside the island there is only a dark optics with no point of reference, where the lost subject becomes the only objective landmark. A non-space is not a void, not the absence of space; a non-space suggests its own space, and what is outside, or trapped inside, that space. Parallel to any reflection of volume of a scanned surface, to which the system can apply color and texture, is a reflection of occlusion, of absence. Such indecorous rays render to us as darkness, and we have no other means to display such information from outside the visual, they are of a darker optic than we cannot perceive, still, they are there.

——
Timo Menke lives and works in Sweden since 1988. He holds an MFA from Konstfack, Stockholm, where he also taught as a senior lecturer from 2004 to 2014. He is engaged at Filmform, dealing with archiving and distribution of film and video art. His practice is research-based with a strong focus on the relationship between the viewer and the viewed, subject and object, recorder and projector, lens and screen. His work examines how cultural identities, social relations and biopolitical issues are charged with concepts of desire, power and history.

Joel Hurlburt lives and works in Sweden since 2003. He holds a BFA in 3D Fine Arts from Massachusetts College of Art, in Boston, and received a Master of Fine Arts from Konstfack, in Stockholm. Since 2014, his practice-based research has focused on materials and methods for sculptural processes, the link between the physical analogue and the digital manifestation, and developing the study of what he calls diffuse objects. His meandering working references include, but are not limited to, phenomenology, perception, physiology, industrial engineering, literature, linguistics and philosophical games. 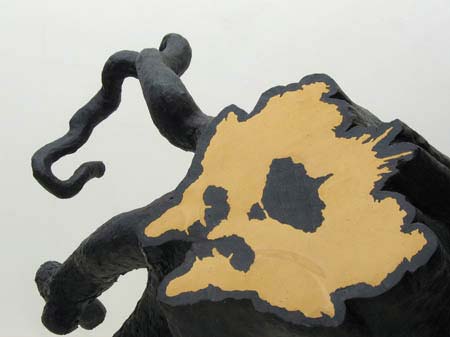 “Reach Away to the Bottom Being”

Joel Hurlburt has always been interested in combinations, and the space between things.  He attempts to navigate between plausibility and the improbable, rather than relying on pure fantasy or strictly replicated reality.   The uncanny form functions as a phenomenological reminder of the independent aspect of the life of the brain.  A desire to question uses of materials and objects, to question the knowledge and beliefs which viewers bring to things, led to an interest in perception and cognition studies. This interest though is not purely intellectual.  In recent years a family connection to neurological disease has come to light, from which subtitle narratives have been derived.  The stoic New England family from which he comes and the reserved affect under which it´s men labor, harbors undisclosed suffering beneath a seemingly impenetrable surface.  Subjects of masculinity, memory, and spatial perception are recurring themes in his work, and are informed by philosophical texts and writers including Gertrude Stein and Walt Whitman.  The results are forms of physical contemplation, reflecting a wandering search for answers through humble means.

Joel Hurlburt was born in Portland, Maine, USA, and studied art at the Massachussetts College of art, in Boston.  He has lived and worked in Stockholm since 2003.